The Mosque Is Now Giving Shelter to the Homeless in London

Read from the source here

Al-Manaar was a key community hub after the Grenfell Tower fire in June. Just minutes away from the site of the tragic blaze in which around 80 people are estimated to have lost their lives, the mosque, which had been the local place of prayer for many of the residents, took a decisive role in helping a grieving community in the midst of tragedy. From facilitating mental health support to holding public meetings for legal help, Al-Manaar not only became the first responders but a support hub for Grenfell victims. They have just become the first mosque in London to join a night shelter programme for the homeless. 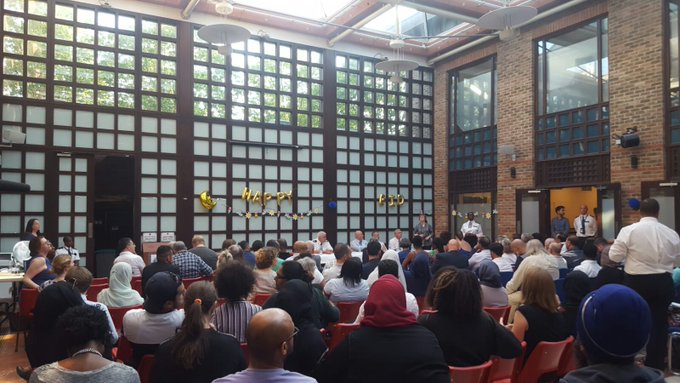 As I take a moment and look around the mosque’s small dining room at the 15 homeless men and women and the handful of volunteers who are all tucking into a dinner of burgers and mash, I can’t help but breathe a sigh of relief that none of our homeless guests will be sleeping outdoors in the cold. At least, not tonight.

Instead, as storm Ophelia continues to pound the British Isles, our guests will be hunkering down in sleeping bags on mats in a warm room in this mosque.

Granted, London has been completely spared from the ravages of this particular storm, which has already taken three lives in Ireland since her rampage began, but it has been a reminder of just how vulnerable our homeless friends are when they are living on the streets and fully exposed to the elements.

A warm meal, a sleeping bag and a cosy spot indoors might not seem like much, but to someone sleeping rough, shelter from the elements can literally be the difference between life and death.

In its eight years of operation, this is the first time a mosque in London is joining in with the night shelter program organised by the West London Mission (WLM). From October to May the WLM offers homeless people who are registered with the scheme a place to eat and sleep each night.

The WLM practices an “inclusive Christian ethos” and partners up with several other faith groups. Each night the homeless guests rotate from one location to another and this year the venues include 13 churches, one synagogue, and finally… a mosque!

For years my friend Saima Ahmed, one of our community’s unsung heroes, expressed her frustration to me that the winter night shelter projects she helps run in the heart of London, have been taking place in churches and synagogues across Westminster… but that no mosques had been involved. I shared her frustration, yearning for mosques to be more active at a practical, hands-on, grassroots level.

Mosques are more than just places to pray, or at least they should be. They should be community centres, educational hubs, and safe spaces to seek solace in times of desperation and need, but too many seem to close their doors once the fundamentals of worship, in the form of the five daily prayers, are achieved without going that step further to serve the local community out of hours.

I had visited Saima at one of the night shelters she was running last winter in Fernhead Methodist Church and had watched a Muslim man pray the evening [Isha] prayers in a quiet corner of the church. Seeing that gave me mixed feelings. I was impressed and grateful to the Church who was offering him this safe space to pray, but frustrated that a mosque was not doing the same.

How is it that a church was offering homeless Muslim men a place to eat, pray and sleep, but that we were not doing the same for either our own Muslim community or for our non-Muslim neighbours?

Why weren’t more mosques getting involved in the practical day-to-day serving of local homeless communities?

I had been in touch with a few mosques in the past to see if they would be willing to open their doors to offer soup kitchens or night shelter spaces and their reasons for saying no included things like funding issues, security concerns and logistical restrictions, some of which seemed like reasonable concerns but others… not so much.

Al-Manaar – Carrying on the spirit of service post-Grenfell

The fact that a mosque had finally agreed to open their doors one night a week throughout the winter period was a real breakthrough. When Saima let me know that she had finally managed to get a mosque on board I was not at all surprised to find out that it was Al-Manaar mosque in West London, nestled just under the A40 flyover. Al-Manaar was a key community hub after the Grenfell Tower fire in June.

I had raced down to the neighbourhood at about 4 or 5 am on the morning of the fire to see if I could help in any way and saw just how quickly Al-Manaar responded to the tragedy. As the day wore on and the horrific news spread, Al-Manaar opened their doors as soon as they could becoming a place of refuge for many of the victims, offering support, and storing and sorting room after room of donations of clothes, furniture, food and water…

Now, a few months later, Al-Manaar is carrying on that spirit of service to the local community by working with the Westminster night shelter project and opening their kitchen, dinning room and halls (including a room named the Grenfell Room in memory of the victims) to between 15-17 homeless people who have signed up with the programme, offering them a safe haven once a week.

This, I’m sure, is largely down to the open mindedness and ethos of community service espoused by Mr Abdurahman Sayed, the CEO of the Mosque. I’d spoken to him post-Grenfell about the possibility of the mosque opening their doors to cater for the homeless and he could not have been more enthusiastic, convinced that this is indeed something all mosques should be doing more of. He was excited about the prospect of Al-Manaar taking on the challenge. His commitment to the new project organized by Saima is evidenced by the fact that he himself volunteers for the night shifts when it’s his mosque’s turn to host the homeless.

We need to support this initiative and encourage the mosque to keep it going in the hopes that others will follow in their footsteps.

Charity in practice, not just in donations…

I also see for myself the dedication and charitable spirit of the Muslim community at the weekly soup kitchen I volunteer with called the Children of Adam. I set this soup kitchen up with friends in London around 6 years ago and have volunteered there every Sunday since (bar illness or travel) and the core group of our most dedicated volunteers are young professional Muslims who choose to come out and serve our 170 plus homeless guests every Sunday, come rain or shine.

The Muslim community has no problem with charitable giving, but we definitely need our mosques to become more involved in the more practical, hands-on aspect of things. The service of the community needs to go beyond fundraisers and talks. It’s not easy, and there is only one Saima Ahmed to go around, but I hope that mosques will look to the example being set by Al-Manaar and open their own doors to the possibility of offering more practical help to our local homeless neighbours. Let’s allow our mosques to live up to their true potential and help them become the safe havens our communities needs.

THE JUBILEE WALK OF FAITH

Al-manaar wishes you and your family to stay safe, look after each-other during this difficult time